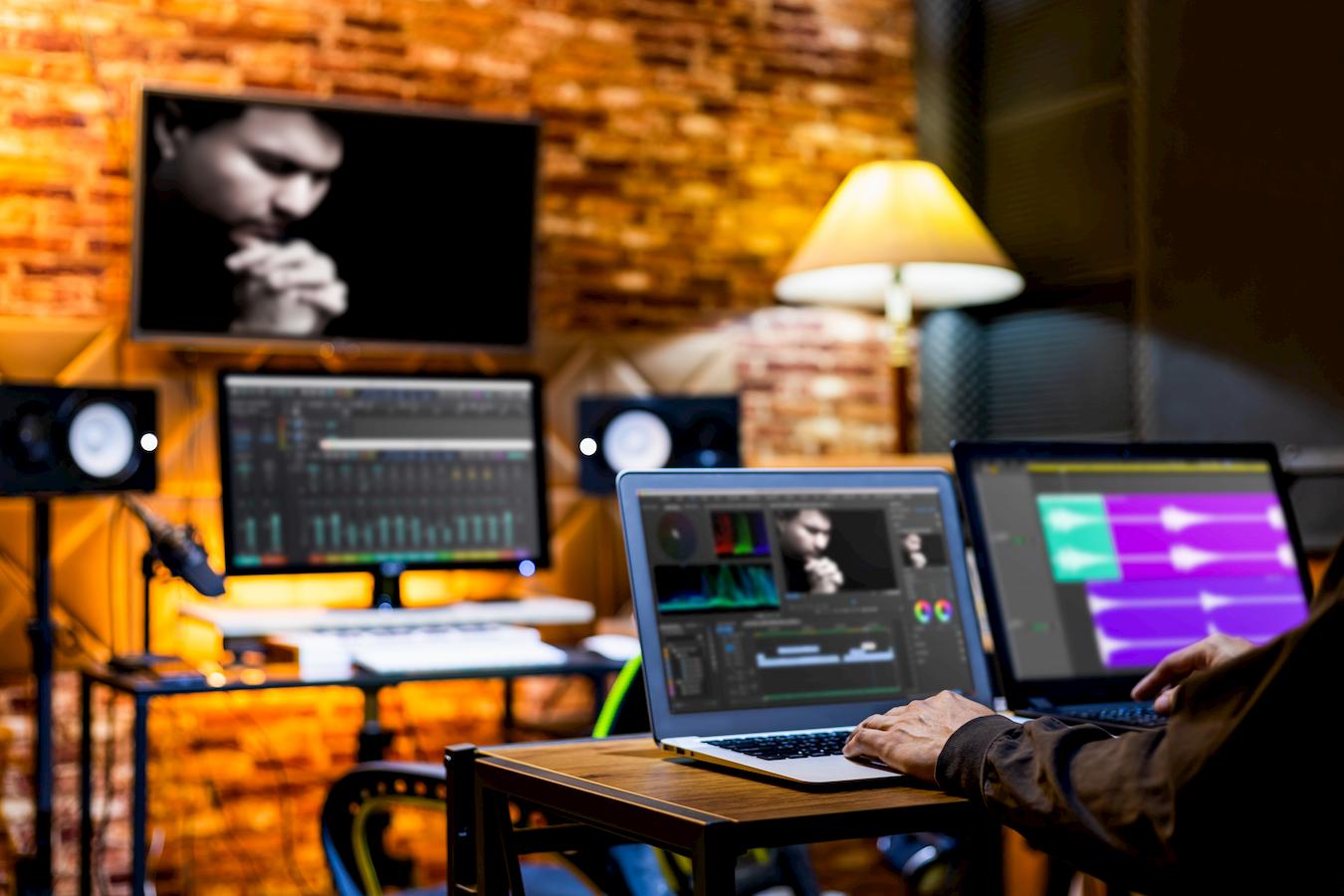 When the director says, “that’s a wrap,” it’s time for post-production to get started. Of course, some people in post-production are already working alongside directors and others during the filming process, but there’s still a lot to be done after the cast and film crew head home.

Post-production includes everything from picture and sound editing to finalizing the opening title sequence and closing credits. There are important people involved at every level of the post-production process, and it can take several months to move through all the necessary stages for the movie to be complete. It requires frequent and effective communication, as well as the right space and equipment, in order to achieve the best results.

See Related: A Historic Los Angeles Soundstage, Then and Now

The editing process – specifically the picture and not the sound (we’ll get to sound in a moment) – involves the storing, cutting, and assembling of film footage. Everything that was shot during the filming process (the raw footage) is considered, but only some of it makes the final cut. The late, great Philip Seymour Hoffman shared the following thoughts about editing:

So editing, or making the cake, if you will, is what sets the pacing, supports the plot, and if done well, serves the story that filmmakers are trying to tell. Directors and editors typically have close working relationships, and will sometimes even sit side-by-side through much of the post-production phase. In addition to the creative side of things, an editor will also have expertise in software like Avid or Final Cut. The editor whittles away at the scenes that don’t function to move the story forward, cuts for time, and does whatever it takes to create a complete first draft of the film – or a rough cut, as it’s more commonly called. When the director and other decision makers give it the thumbs up, the picture is locked. This means that the picture editing process is complete and now it’s time to hand it over to the sound editors for the sound editing phase.

Sound editing is the post-production phase in which all the sound for the film is selected or created, and then solidified with final sound mixing. This means there’s a lot of work to be done pertaining to the music, sound effects, ambient sound, and dialogue.

Sometimes the soundtrack is as memorable as the movie itself. At this stage of post-production (and likely beginning a bit before), filmmakers will need to secure the rights to existing songs with the help of a music supervisor and/or hire a composer to score the picture. It’s important to have someone who is familiar with securing recording rights and publishing rights, and knows the ins and outs of licensing.

Often during the filming phase, the natural background sounds from set aren’t captured well, and must be recreated. Whether it’s footsteps, a window breaking, or other ambient noise, foley artists are the people who come in to do the sound effects. Again, it’s important to have a controlled environment and the best audio equipment to make sure sound effects are authentic and high-quality.

When there are issues with dialogue, and a director or sound engineer decides there needs to be a “do-over” of sorts, the actors are called in to re-record a scene or segment. This is called Automated Dialog Replacement or ADR, and is sometimes still referred to as looping. This happens in a controlled setting in order to better manage audio quality and keep out unwanted noise.

Once all of the above editing has been completed, the final phase as far as sound is concerned is the sound mixing. This is when sound mixers adjust volume levels, and try to achieve the right tonal balance, using either hardware or software equalization, dynamics processors and effects. It turns out it’s a little more complicated than just turning the dial to 11 (shout out to Spinal Tap).

Bonus: Reach the Heights of Professional Production in Our Soundstage Rentals Spaces

Color grading and color correction come in towards the end of the post-production stage. Color correction makes sure to match footage to how the human eye sees it, balancing out colors and brightness as needed. Lighting can change while shooting, but if a filmmaker doesn’t want to convey passage of time, color correction will, well, correct this. Color grading takes it to the next level by manipulating colors to affect the mood, or attain a particular look and feel to enhance the story.

Some films require visual effects when there are things that can’t quite be actualized on set. If a picture has a fun-loving unicorn or a girl with wings, chances are that CGI will be necessary. These visual effects are added during post-production, and can completely transform a film.

The opening title sequence and closing credits are also part of the post-production stage. They’ve come a long way, baby, since the early days of motion pictures. If you watched an old classic recently, you may have noticed how they used to run the credits before the film began, listing off the names of all involved before the first scene started. There wasn’t always a whole lot of consideration to this portion of the film, but now, both the beginning and the end of a film provide creative opportunities to enhance the viewing experience.

Here’s a rundown of some of the best end credits of all time, according to CineFix:

The final steps in the post-production phase also include promotion and distribution. Many filmmakers hire an entirely different editing team to produce the film’s trailer. It’s an art unto itself, so it may make sense to hand it off to experts who have perfected that promotional pitch to viewers. Along with a poster and a few other specifics that are needed for international distribution, that about sums up our brief overview of the post-production process for film.

Mack Sennett Studios has professional sound stages, production offices, and all the amenities needed for making a film, from pre-production to post. Please give us a call with any questions you might have, and we’ll be happy to help.

Mack Sennett Studios is a historic full-service photography studio, production soundstage, and private event space in Silver Lake, serving as creative home to the Los Angeles cultural renaissance for the last 100 years. Check us out on Facebook, Twitter, Vimeo, Pinterest, Yelp and Instagram.